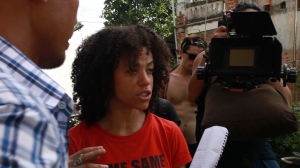 Lia Johnson is an award-winning filmmaker and actress. Her directorial debut “Tennis For Two” won the Most Original Film Award at the International Tres Court Film Festival in Singapore in May 2010. Lia produced the Tribeca short film “Spanish Boots”, as well as the award-winning feature film “I’m Through With White Girls.” This festival favorite sold for North American distribution and premiered on Showtime Cable Networks.

“My favorite films blend reality and fiction, politics and entertainment. Themes of ‘starting over’ and ‘redemption’ are recurring ideas in my work. Exploring these ideas is critical to my interpretation of my American ‘identity.’ Having lived abroad in South America, Africa, Europe and in Asia, my reflections on American identity greatly influence my work.“

PHYLLIS JOHNSON is a producer and an accomplished actress and graduate of the Yale School of Drama, where she won the Fox Family Foundation Grant and The Oliver Thorndike Prize. Phyllis has contributed to the production of many short films, commercials, and music videos and is the executive producer of the award-winning feature film I’M THROUGH WITH WHITE GIRLS. This festival favorite sold for distribution and premiered on Showtime Cable Networks. As an actress, Phyllis’ favorite film and television credits include: HUG (Sundance/SXSW), THE CYCLE (American Black Film Festival/HBO), IN MEMORY OF THE DAYS TO COME (w/ Elodie Bouchez), “Law & Order: Criminal Intent,” “Law & Order,” and “As The World Turns.” Some of her favorite New York City Theater credits include: The Public/NYSF, EST, NY Stage & Film. Regional credits include the Yale Rep., Yale Summer Cabaret, InterAct Theatre and Williamstown. Phyllis has been nominated for two NY Innovative Theatre Awards. Phyllis also works regularly as a voice actor supporting post-production ADR on tv series and films such as: The Americans, The Knick, Blue Bloods, Boardwalk Empire, The Affair, True Detective, Show Me A Hero, THE DEVIL WEARS PRADA, SALT, AMERICAN GANGSTER, RUN ALL NIGHT, and GOD’S POCKET.